In 2019, Liverpool FC came 2nd in the Premier League and Card Connection franchisee Vinny Robinson also made it a 2nd, when he purchased the Liverpool franchise territory, too.
“Back in 1997 I owned a convenience store in Liverpool, and stocked Card Connection cards, which always seemed to sell well. The Liverpool franchisee at the time mentioned one day that the neighbouring Chester franchise territory was for sale and I decided to take the leap and buy it. I was immediately able to use my retail experience but from the other side of the counter,” explained Vinny.
20 years later, the sitting franchisee in Liverpool suddenly departed, and Card Connection found themselves turning to the ever-dependable Vinny for his help. Fortunately, Vinny agreed to step into the breach and committed himself to being caretaker for Liverpool, covering it in addition to his own territory.
“Card Connection has always been professionally run, but it’s also very friendly,” continues Vinny. “Over the two decades it’s not lost its family feel, even when it was bought by UKG Greetings, so I was happy to repay their support over the years, by offering mine. It didn’t take me long to appreciate the potential of the two areas added together and I was in the perfect ‘try before you buy’ scenario. When I asked to buy the second territory, Card Connection were very helpful and supportive with the financial side of things, so we both saw it as a good investment that I took on the Liverpool territory permanently.”
Vinny loves continually meeting new faces, so his time as a franchisee has been characterised by him being tireless in his customer and service focus. His relationships are so strong with his customers, that Vinny has even found himself being best man at a customer’s wedding!
And the future is looking good for the now combined territories. In the same period that Liverpool football club have traded their runner up spot for being crowned Premier League Champions, Vinny has reversed the sales decline he’d inherited in Liverpool by growing sales by a massive 24%. It’s all seems somehow fated, for the franchisee who holds the current Card Connection award for teamwork! 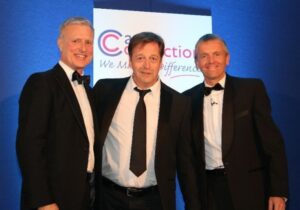 As well as getting to grips so successfully with running two areas, somewhere in it all, Vinny has still managed to find time to continue playing guitar in a local band. Now that’s what you call multi-tasking!
Card Connection is part of UK Greetings, and has limited vacancies for franchisees keen to run a growing business. Candidates would ideally be a couple operating from home, or have some management experience as, once established, they could be expected to employ a small team, operate a small warehouse and have several liveried vans on the road. Since the franchise network in the UK is complete, the available opportunities now consist of acquiring an already established territory from an existing franchisee. These vary in price according to their level of development but start at £10k + Stock + Card Connection fee with earnings potential in excess of £50k per annum.