Card Connection is one of Ireland & the UK’s most successful card publishers and is the market leader in the franchised distribution of greeting cards.

In addition to all the features detailed on our website, Card Connection Ireland: 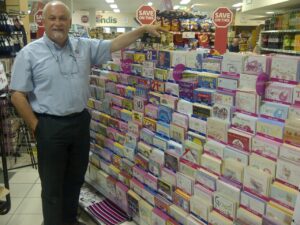 Tony Lees worked in the corporate world of the Fast Moving, Consumer Goods (FMCG) industry for his whole career. As a manager he employed a team, yet he always needed to report back to his own managers. In 2008, Tony retired and seven years ago, became a self-employed Card Connection franchisee in South West Ireland. Now 62, Tony and his wife and four other team members run one of the largest Card Connection franchises in the UK and Ireland.

Tony explains: “Originally I thought getting into the greeting card industry might be a bit of a hobby. But it’s turned out to be far more than that! As a team, we run the franchise from a 1,600sq ft. warehouse purpose built with racking plus mezzanine, picking room and office. We have three vans on the road and deliver to around 265 retailers around Ireland’s South West region, in particular, to the counties of Limerick, South Tipperary, Waterford, Cork and Kerry. This year we are on course to break 580K Euros turnover with our ultimate goal of reaching £700K Euros by 2021 with our existing resources.

“However, to get to this stage has required an incredible amount of hard-work and commitment from the whole team. My wife Jo who works with our manager Kathy to take care of all the needs in the warehouse and office, from all the purchasing, picking, stock control plus all admin duties. Tom, Donal and Dinny take care of the customer’s needs in the field. I over see the whole operation. I know, I work much harder now than I ever did in the FMCG world, but I’m much happier. Running a business like this is less like a job and more like a life-style. Self-employment offers give and take and so I have time to spend with my grandchildren, yet if I need to take care of some admin on a Sunday afternoon then that’s part and parcel of the role too.”
Card Connection is one of the UK and Ireland’s most successful card publishers and is the market leader in the franchised distribution of greeting cards. Franchisees use a proven system to place quality greeting cards and gifts in retail outlets on a ‘consignment’ basis. This means the stock and display equipment are installed on free loan to the retailer. This is one step beyond ‘sale or return’ as Card Connection customers never have to buy the stock initially, only paying for what they sell.
Card Connection’s award-winning merchandising service provided to retailers by local franchisees has proved popular with retailers all over the UK and Ireland including Card Connection’s key national accounts such as Spar, Nisa, Supervalu, Centra, Costcutter, Mace, Londis, Total, Shell, Barry’s Of Mallow, Gala Retail Services, ADM/Londis, Musgrave/Daybreak and Topaz.
Tony continues: “There is no-doubt, the first few years setting up the franchise were particularly challenging. I was starting the franchise in the height of recession in Ireland and the market is particularly competitive within the region, plus the fact that we were still only learning the business.
“The franchise also needed investment and business loans helped us to achieve our goals. As we started working with new and better retail accounts we needed to supply new fixtures to display the greetings cards. We also needed bigger premises to house the stock, plus more vehicles and staff. At one point I was worried we were investing heavily and building a liability rather than an asset and so to test this, a few years ago, I advertised the franchise for sale. However, when someone did put in an offer, it had become clear we were in a much better financial position and our liability had started to turn around and become an asset, so we decided to continue to 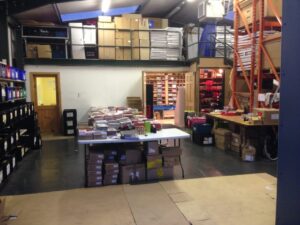 take advantage of that.
“Seven years in and most of our loans have been paid off and we have built up a platinum franchise. We are content and happy and looking forward to a more secure and profitable future with less financial pressure and a better work-life balance.
“The Card Connection team have been supportive and helped us throughout the challenging times we have faced. I must give them credit for that. I am known to be quite vocal and although constructive with my feedback, I inevitably don’t always agree with all the high-level decisions! Yet, I know the head-office team always have the interests of the whole franchisee network at heart and the bigger picture of the franchise is important. The fact that many franchisees have been with the network for more than 15 years and some more than 20 years, is a testament to how well the overall business is run.
“One part of the franchise I appreciate is the flexibility. If you deliver a consumable like milk for example, you have to deliver at the same time every day, day-in and day-out. With greeting cards on the other hand, if something happens and you are delayed for a few days it’s not the end of the world. This flexibility makes the role enjoyable and the industry is like a magnet, it draws you in.
“The creativity of creating displays in-store is also appealing. We ensure greeting card displays are merchandised in accordance with Card Connection’s tried and tested ‘planogram’ and stock is regularly stripped out to ensure that all displays carry their fair share of new designs. Where we can, we introduce hanging bars for gift wrap, gift bags and Gift Connection accessories at the time of installation as it is always more difficult to negotiate this space afterwards. We also revised and synchronised our stock room layout with the latest planogram too, 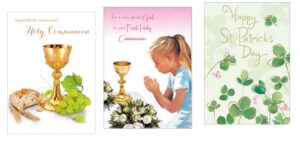 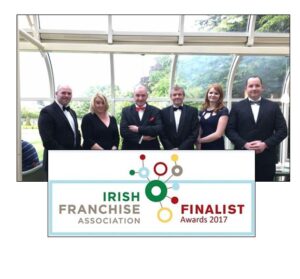 Franchisee for Ireland West and Midlands, was as a finalist for the Irish Franchise Association, Franchisee of the Year Award in the Service category.  The overall winners of the 22nd annual IFA Awards, which celebrate excellence in franchising and reward outstanding achievements from the franchise community, was announced at a black-tie gala and ceremony held at Radisson St Helen’s Hotel, Co. Dublin.