Penny has worked in the Greeting Card Industry for 20 years, starting in her home country of South Africa, then moving to England where she was employed by Card Connection as a Regional Sales Manager. After 5 years managing 11 Card Connection franchisees of her own, she was so impressed by the business model that she wanted to invest in her own franchise. 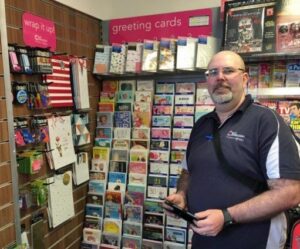 At that time Penny’s husband, Colin, was working awkward shift patterns in security, which interfered greatly with his family life. He felt that with Penny and also a daughter from a previous relationship to consider, he didn’t have the work/life balance that he craved.
He seized an opportunity to work with the Card Connection franchisee for Reading, whose territory just happened to be on the market. He was able to experience the day-to-day workings of the franchise, to see if it was something he would like to do. He took to it like a duck to water, immediately seeing the benefits of a better work/life balance it could offer. He could now spend quality time with his daughter Sam, who visits them regularly during school holidays, while also being able to spend more time with Penny.
After 8 months Penny and Colin took the plunge and bought the Reading territory, initially running the business from their rented home by converting the single garage to a stock room.
Working as a team they were able to maintain excellent relationships with their customers, often spending time out on the road together. New franchisees normally expect to see a decline in turnover during their first year as they get to know customers and the seasonal effects on their operations, but Penny’s experience paid dividends and they managed to grow the business 2% in the first year.
Year 2 saw no let-up by Penny & Colin, and they ended the year with an overall 4% growth in their business, along the way chalking up the award as Regional Winners for sales of giftwrap and gift bags.
Penny and Colin then set themselves a 2-year target to buy their own home, something that was never on the agenda with their previous employment situations.
The third year of their franchise saw further sales growth but then the Covid Pandemic hit the world in March 2020. Their business literally ground to a halt overnight, and as like many others did, they furloughed as per Government guidelines. 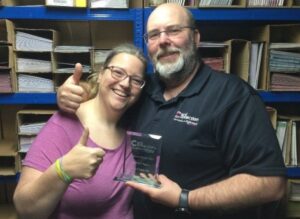 Fortunately, it quickly became apparent the public’s demand for greeting cards as a way to stay connected with loved ones they couldn’t see during lockdown was enormous. Not initially being able to go out and merchandise, this industrious couple managed to post stock out to some customers desperate to refill the empty card displays. As soon as restrictions allowed, they worked relentlessly, seven days a week to keep up with the demand. Unprecedented sales followed, and they ended their 3rd year with a massive 15% growth!
Now in their 4th year of running the business, lockdown extensions pushed their half year results to a fantastic 17% growth. With June almost upon them they picked up Card Connection’s award for Regional Franchisees of the Year 2021. This was particularly impressive, given the strong sales across the whole of the Card Connection network that meant they were up against stiff competition.

Although their franchise is very demanding, they have loved every minute of watching their 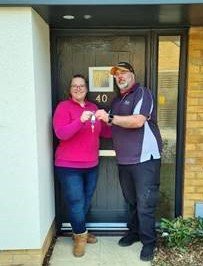 hard work pay off, not just with increased turnover, but also the satisfaction of a job well done. The cherry on top of the cake is they’ve been able to say goodbye to wasted money of renting, by purchasing their very

first home. Once moved in, they immediately invested in building a bespoke garden unit, specifically designed to be their perfect warehouse.
The few short steps from the home they own and love to the purpose-built office and warehouse of the successful business they’ve built together ss a daily reminder of the fantastic new life they have achieved.
Summing up their Card Connection journey, Penny says, “In short, this business has provided us with a steady income, the ability to buy own home and have amazing work life balance. What more could we ask for?”

After 27 years working in the same place, James Bird was ready to make the step up to running his own business. Investing in a Card Connection franchise gave him the instant advantage of having a ready-made customer base all set up, meaning he could earn an income from day one.
“I started as a cashier in a petrol station and worked my way up through supervisor, then to Store manager,” explains James, “So when I took on the franchise for Gloucester in February 2019 I had a great understanding of how retail works in the convenience sector and was I able to transfer all that knowledge and experience to the benefit of the franchise.”
With the full support of his partner Sandy, James has been able to improve his work/life balance to spend more time with his family. Gone is his previous the stress of dealing with staffing issues, as being his own boss means he can be flexible with how he plans his days. He prefers to start early: “I have my van loaded the night before with everything I need for the next day, and often hit the road before 7am,” smiles James.
Supplying greeting cards and other related product to over 150 stores across his territory, he has a great mix of outlets from nationally branded names like Costcutter, Premier and Londis to smaller independent shops. 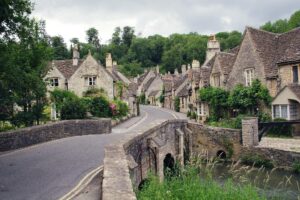 The territory includes the cathedral city of Gloucester, Cheltenham, Stroud and Chippenham, which involves driving thought the picturesque Cotswolds area of outstanding beauty. “Yes, there are worse places to work!” jokes James.
Finding out exactly what each outlet needs and how its customers vary is a crucial part of him delivering a personalised service and in doing so driving up his sales. 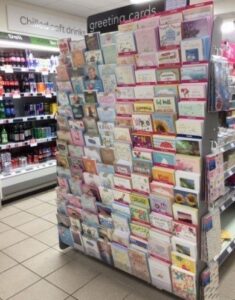 “Retail is detail,” quotes James. “Spending time talking to customers is important and after merchandising stores I always check they are happy with their displays before I leave.”