Joe purchased his first franchise way back in 1999. At the time, Card Connection was a proven greeting card supplier in the UK, but not yet in Ireland; so it was calculated step by this shrewd businessman. 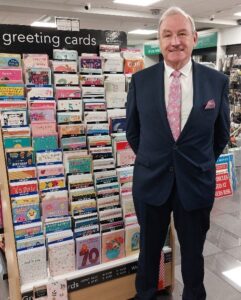 Hard work took his business in only one direction, with Joe going on to purchase a further six counties in 2008 and then an additional 2 counties in 2010. Over 23 years, he built-up his territory from zero to a turnover of over €700k, supplying around 400 retail stores with Card Connection’s extensive range of greeting cards and accessories.

Over the years, Joe tirelessly nurtured relationships with retail customers, building levels of trust that was the cornerstones of a franchise business, now employing a team of six.

Joe’s input into Card Connection Irish National Accounts successes, that benefited all Irish franchisees, was significant. National Accounts have grown to an amazing 95% of total turnover, which could not have happened if it wasn’t for Joe’s efforts.

In addition, he was a founding member of the ‘Franchise Liaison Group’ which over a dozen years helped mould the future of the whole of Card Connection

Joe was also the first ‘platinum’ Card Connection franchise a new format of larger franchise and led the way in developing the model for others to follow.

No surprise then, that Joe won the Card Connection Franchisee of the Year Award an amazing and record breaking six times.

Sadly, missed by his family, his customers, his fellow franchisees and Card Connection head office staff, this special award is presented in his name.