Card Connection reaches its Pearl Anniversary, celebrating the day back in 1992 when two budding entrepreneurs married together a winning mix of enticing business propositions – colourful greeting cards, great service all backed by the consignment principle of supply.
The newly formed company made an instant impact with its manta of “You only pay for what you sell” – where stores were offered a bespoke greeting card range, regularly merchandised for them by a dedicated local franchisee, with not a penny of outlay involved to the store owner. Outlets flocked to Card Connection, tempted by having no financial risk to their business, only rewards. So much so, that company quickly went from zero franchisees to a network of over 100 franchised territories, covering all of UK and Ireland.
Along the way they picked up awards for their service and also picked up some household names in neighborhood convenience retail.
With Card Connection becoming the clear leader in consignment greeting card supply to the convenience sector, such success was bound to attract attention. In March 2008, one of the country’s biggest card publisher, UK Greetings, could no longer resist the temptation to incorporate Card Connection into their fold. 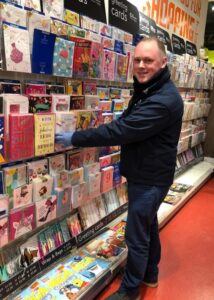 As Card Connection’s Managing Director Michael Johnson puts it; “We we’re supplying just about everyone that UK Greetings wasn’t, so from the perspective of there being very little conflicting overlap, we were the perfect acquisition to complement their existing business.”
It was a win-win situation for both parties, as each simply carried on doing what they were best at, meaning neither Card Connection nor UKG has ever have had any reason to regret the astute acquisition.
Now supplying some 12,000 outlets, Card Connection are in terrific position to look forwards towards the next 30 years. “Great product and great service have got us this far,” said Johnson, “And as long as we never relax in maintaining our commitments to those ideals, there’s no reason to think our next milestone anniversary won’t be anything else than another big reason to celebrate!”