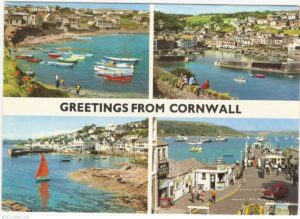 Cornwall may be one of the UK’s hottest tourist destinations but it’s no holiday for Card Connection franchisees David and Marie Clements! Their franchise territory covers this lovely peninsular and thanks to a glut of new business, they now find themselves working harder and happily, more profitably than ever before!

“Since March this year, we’ve taken on 24 new Spar company owned stores” explains David. “We’d previously shared this business with competitors, but our superior service and broader product range has allowed us to become sole supplier in the majority of their stores. Better still, now that we’ve became preferred supplier to Spar Appleby Westward, we’ve also picked up stores outside of the company owned group, too.”

The net result is that in the last year, the Clements have seen sales for their territory grown by 24%. Marie is quick to point out that it’s not just about the new business, though: “By trading up to higher price points, and offering the widest possible range that space allows in every store, our overall sales in the last three years are up nearly 33%!”

David reveals another tactic behind their success: “As we won the larger, more profitable stores, we took the decision not to let go of any of our smaller, less profitable outlets. It’s meant us having to work harder, but then why should we take from competitors with one hand and give them anything back with the other?!”

David and Marie work differently to many couples owning a Card Connection franchise, in that instead of one being based back home in the office while the other goes out merchandising, they both prefer to visit the shops together. This allows each of them to have their own specialist contribution to the business.
Marie’s strips down the displays, looking at the design styles and price points that are selling, then makes any adjustments in the picking profiles so as to maximize to sales in that store. She then refills with fresh stock, making sure that all the key price points are in the best locations on the display.
David’s tasks are then to count the old card stock by code, doing the same for the non-card items around the store, like giftwrap, bags and party products. He replenishes any outstanding stock from their van before entering everything into his iPad and producing the invoice for payment for the owner or manager.
Finally, before leaving the store, they always take a few minutes to speak to the retailer to ensure they are completely happy with everything.
It’s this close teamwork that means both of them have an almost 360 degree picture of their business. As Marie concludes: “Although it’s our 12th year with Card Connection, we are still learning little tricks that help us to work smarter and more importantly, more rewardingly!”