From Card Connection’s beginning in 1992, female franchisees have played a key role in the success of the greeting card franchisor’s brand. As women remain the primary purchasers of greetings cards, perhaps it’s not so surprising that female franchisees have an affinity with the product the company supplies.
Around 8% of Card Connection’s franchisee territories are run solely by women, who between them have chalked up over 73 years contribution to success of the publisher’s franchise network. Leading the way in sales is franchisee for Glasgow, Elaine Anderson, who’s been with the company for 10 years and is amongst the top 20% performers across the entire Card Connection network. 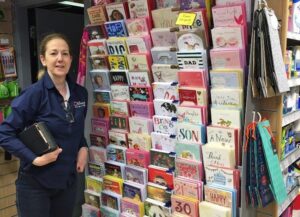 Elaine’s 10 years are dwarfed by the contribution of Helen Johnson, who recently accepted an award for 23 successful years as the company’s franchisee for Nottingham.

Special mention must also go to Angela Doherty, franchisee for Motherwell for her amazing 23 years of service, and Jill Rayner in North Yorkshire, who’s been at the helm of her greeting card franchise since 2003.
Many Card Connection franchises are operated by couples, were the female partner often makes the key design purchase & planned display decisions and vital stock management back at the office, whilst the partner does the more physical aspect of merchandising the card displays in stores. Take these numbers into account, plus add in other franchise territories where women play a key business role, and the figure for the females contributing to the success the Card Connection network jumps to 50%.

Card Connection franchises come up for sale periodically, so if you’re looking for franchise opportunity that properly values the business acumen of female franchisees and is based around a product with a proven stable long-term appeal, then look no further.