When Thayalan Markandu took over the Card Connection franchise for Middlesbrough, he already had a head start on most of the new franchisees that had gone before him. Firstly, as an ex-retailer himself, he knew the challenges his new customers faced. Secondly, as an ex-customer who had stocked Card Connection’s greeting cards, he knew the range and had total confidence in the product he would be supplying. 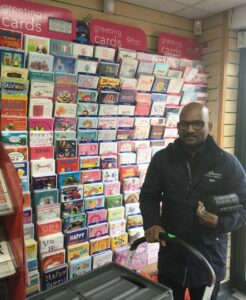 “I bought part of an area owned by long-standing franchisees Vicki and Andy Thompson, and they gave me a brilliant in-depth hand-over briefing,” explained Thayalan. “Their customer records where excellent, and they even helped me make up all my Mother’s Day deliveries. Add to this the in-depth training by Card Connection staff at both Head Office and in my area, meant I was able to hit the ground running.”

After an initial period getting to grips with his new business, Thayalan has already increased territory sales in the last three months compared to the same period last year. “It’s helped that I’ve been able to call on friends and contacts from my time as a retailer to successfully open accounts in several new stores,” added Thayalan.

Thayalan & Siva have just learned that their hard work has paid off as they were announced as the National Winners of a competition run by Card Connection with a fantastic trip to New York as the prize.