Card Connection franchisee Clive Jones is a man never to settle for the way things are. 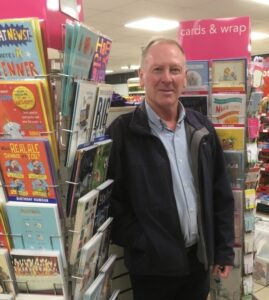 When he bought the franchise territory of Bristol & North Somerset over 25 years ago, inheriting just 59 stores, the outgoing franchisee said there weren’t any more shops to be gained as new business in the area.

In his first year Clive increased sales from 39,000 cards to over 70,000 cards and the area continued to grow every year since. He now supplies greeting cards to 245 stores and his sales are over 220,000 single cards!

This means that during his time with Card Connection, Clive has seen a massive 466% growth in sales, helped in part by him expanding his growth potential by purchasing a second adjacent franchise territory.

Even in this past year, blighted by the pandemic, the public’s appetite for marking life’s important occasions by sending and receiving greeting cards, has meant Clive has enjoyed a 14% growth in his sales.

With his area covering busy towns like Weston Super Mere, Taunton and Glastonbury, plus the jewel in the crown Bristol, a City whose population is expected to reach half a million by the end of the decade; Clive still sees even more potential in his territory.

Clive runs the business along with the help of his wife Sarah and they make a great team. While Clive hits the road to merchandise his ever-growing list of stores, Sarah stays back at base, planning picking & packing the stock needed to best maximise sales in each outlet.

Over the years they have seen their business grow from a one price point standard card offering to two comprehensive card ranges, each with multiple price points and formats.

“When I started with Card Connection there were many competitors, but over the years I’ve found myself becoming sole supplier to more and more of my customers. Clearly a case of them not keeping up with the Joneses,” smiles Clive.