David and Helen Rabaiotti are Card Connection’s Franchisees of the Year 2021. It has been an amazing set of achievements that pushed them to the top award in the greeting card publisher’s franchise network. 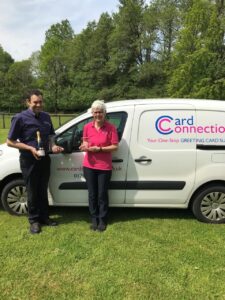 Having initially purchased the Bath area in 2010, they were soon thirsty for more. So, when the Newport territory in South Wales come onto the market, they jumped at the chance to take on an area with much more potential for growth. This involved them selling the Bath area and their home and upping sticks to Wales. Taking on a new and much larger territory, along with its storage unit and staff was something on a scale they hadn’t dealt with before.

Through hard work and focus, all went well, and it seemed that no sooner had they settled into their new home and business in Wales, than the opportunity to buy the adjoining area of Cardiff presented itself. Once more they decided to take the plunge, purchase an extra territory and immersed themselves into every aspect of their burgeoning business.

Not long into their latest purchase a target was then set for greatness. Could they pull out all the stops and break the £300k sales barrier to push them into Super Platinum status? Within months the question was answered with a resounding YES!

With so much going on during the Covid pandemic and the ever-shifting challenges of trying to keep so many customers happy, they still found time to win several Card Connection sales competitions, including for ‘Opening Most New Stores’. This all helped to push their sales to the next level, and at the end of April 2021 they were sitting at 2nd in the network leader board for year-on-year % increase to their business.

On 21st May 2021 David & Helen were crowned not just South Wales & Central regional Franchisee of the Year winners, but also the overall Franchise of the Year for the entire Card Connection network. Now that’s what you call a seriously right move!