At Card Connection’s Annual Conference on May 17th, a trio of franchisees from the Southern half of the British Isles where recognised for their exceptionally strong performances over the last calendar year.

Hanish Patel, franchisee for Richmond, was proud to receive the 2019 regional award for Card Connection’s Southern Region.  Having joined the network in September 2014, Hanish had already picked up the Company’s Chairman’s Award for teamwork back in 2018.  So scooping the award for his region against some very strong competition was no mean feat

Kiri Navaratnam took on the franchise for Leicester in only March 2017, and immediately had a huge rebuilding task on his hands.  Through hard work and dogged determination he’s seen impressive growth, so was an obvious choice to clinch the South Wales & Central Regional award. 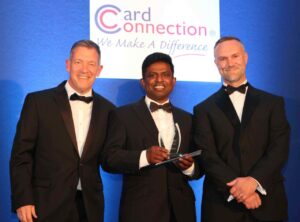 The finale award winner in the South of the country was Nishan Jeyakumar.   Nishan took over the Croydon area back in September 2016 and won the Anglia and Midlands Region Award back in 2018.  To pick up same award for the second year running is a fantastic demonstration of his consistency and tenacity in how he approaches his business. 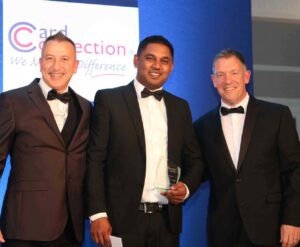 Card Connection’s National Sales Director Graham Staff is rightly proud of the performance of all three winners: “Applauding the achievements of our most successful franchisees sends a strong message to our network that as a franchisor we recognise that we are only as strong as our franchisees”