Friday May 17th 2019 and Gabriel McGeown scoops the top prize at Card Connection’s 2019 Annual Conference. The award was presented during a gala dinner by Managing Director Michael Johnson and Creative Director Kelly Courtenay.
‘Gabe,’ as he’s known by all, was delighted to accept the prize, along with his Business Development Manager Peter Robinson.
“There was stiff completion from across our network,” explained Johnson, “and although Gabe had been a previous recipient of this award in 2011 and 2012, we simply couldn’t ignore his tremendous achievement of being the first Card Connection franchisee to reach annual unit sales of over one million units!” 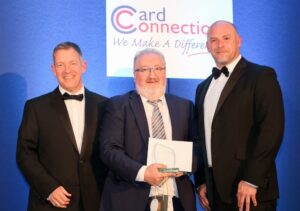 McGeown joined Card Connection in 2008, buying a territory that included County Antrim, Belfast and North Down. Since then he’s taken the opportunity to purchase Armagh and South Tyrone territories, plus part of the County Down Territory, in order to take advantage of economies of scale through running a bigger business.

When the one remaining Northern Irish franchisee decided to retire in 2018, Gabe added Derry/Londonderry, as the final piece in jigsaw.
“Gabe’s ambition and track record of driving sales has always made him one of our network’s top performers, but he and his team continue to set themselves new challenges and goals” said Johnson. “Reaching 1 million units is an unprecedented achievement and a testament to the outstanding quality of our product range.”

As ‘Mr Northern Ireland’ McGeown’s relies on a team of 5 staff and a fleet of 5 vehicles to cover the merchandising needs of such a large area.
Johnson added, “With all of Card Connection’s franchisees in Ireland performing particularly strongly, Gabe also picked up the regional award for the whole of Ireland, making it double celebration for him and night to really remember!”