When Kochchu Udayan took on a new career challenge by purchasing the greeting card franchise for Chesterfield back in July 2019 he did so because he actually wanted to work less!

“I’d run a convenience store for 4 years with my wife Gemma, but this was in addition to a chilled food delivery business which I’d owned for 7 years. Between the two businesses I’d often work 16 hours a day and only get Christmas day off! So, I took the decision to sell both, as I was missing out on family time my four children, who I could see were growing up without me,” explains Kochchu. 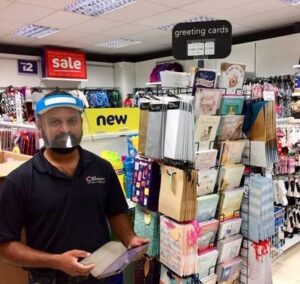 “The previous Card Connection franchisee supplied our store and was looking to retire and sell the franchise, I mentioned I was looking for a new business opportunity – so it was perfect timing! The idea of buying into an already established business with flexible working times really appealed to me.”

The territory is mostly based around Chesterfield with its famous crooked spire but also takes in South East Sheffield and parts of Lincolnshire. The outlets Kochchu merchandises provide him with a nice contrast of busy town and city convenience stores, plus community stores and farm shops in the more rural areas.

Kochchu’s background in convenience means he has a great rapport with his customers and its’s also helped him make excellent progress opening new stores, adding a score of new outlets in the last year alone. Although he now gets to enjoy his weekends off, old habits die hard and he’s finding himself hungry to add even more new stores!

With first year sales riding 15% higher than when he bought the franchise, Kochchu is feeling extremely optimistic about the future, so much so that in the longer term he’d be interested in expanding his area, should a neighbouring franchise become available.