“In many ways, I’ve got the best of both worlds,” smiles Bhaumik Shah, Card Connection’s Franchisee for Bath & Swindon, “When I purchased the Bath area in April 2019, it complemented my existing Swindon territory in more ways than I could ever have hoped!”
This is largely due to the geography and the demographics of the new area. “Bath and its surrounding towns like Shaftesbury, Trowbridge and Warminster are much more affluent than I was used to with Swindon; that means I sell many more of the higher price point cards, making for a very different balance on my displays,” explains Bhaumik.
Add this to the fact that Card Connection is sole supplier in many of his rural stores, where they can often be the only shop in the village, and it can often be a case of one outlet in his Bath area being worth five stores in Swindon. “It’s a certainly a contrast to the urban areas of Swindon, where there is more choice of stores for card buyers and more competitors alongside my displays fighting for their custom,” continues Bhaumik. 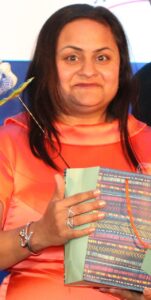 The Bath area has increased his store count from 91 to 170, and the extra revenue has enabled Bhaumik’s wife Neha to come on board with the business. “It’s been a learning curve getting to know the new area, with customers who demand a different mix of product, but Neha, who plans, picks and packs the stock for both halves of the territory has been terrific with getting to grips with everything, plus she’s brought a feminine eye to the design choice which I didn’t perhaps appreciate when it was all down to me!”, concedes Bhaumik.
Andrew Bull, Card Connection’s Business Development Manager charged with helping the Shahs to grow their business echoes Bhaumik’s sentiments: “They now have two areas, twice the store base and the two of them are now working together to maximise the business; so every way you look at it, it really is the best of both worlds!”