It’s been quite some four years for Card Connection Franchisee, Hanish Patel. After purchasing his area in 2014 he quickly set down a marker by growing his sales by 20% in his first year. Not shy of prospecting for new stores, Hanish saw a great potential to add greatly to his numbers by purchasing Card Connection’s Luton area in 2017.
The two areas that Hanish now runs were once upon a time four separate Card Connection territories, so he has lots of potential to work with,” explained Card Connection’s Managing Director, Michael Johnson explained. “He is a very organised person and this extends to the way he works with his merchandising staff. Each of them has clear responsibilities, and this even including targets for prospecting and opening new outlets.”
“We try to make prospecting an ongoing process, aiming to target one new store per week,” confirms Hanish. “Having previously been in charge of a number of retail stores before I became a Card Connection franchisee, I believe this helps me gain a store holder’s trust. I like to think that they can see that my experience gives me a unique insight and means that I understand their needs better than our competitors.” 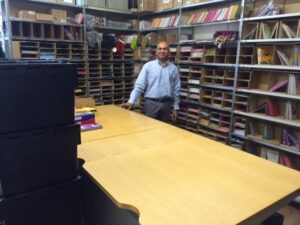 “It’s not just about new stores, though,” continues Hanish, “We have an excellent product range, so my other big target is to increase sales from existing stores by broadening the product offering wherever I can.”
Michael Johnson is delighted with the progress Hanish has made with his areas; “Hanish has grown his retail customers from around 200 accounts in the beginning to nearly 500 stores today,” said. “His first class approach to merchandising ensures every store has the correct style of cards to fit its customer profile. It’s this attention to detail and dedicated service that allows him to increase his market share in what is a very competitive region.”
Back in May 2018, in recognition for all his hard work, Hanish won Card Connection’s coveted Chairman’s Award for outstanding service.